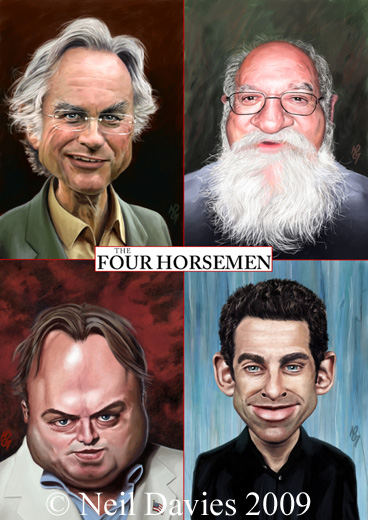 On the 30th of September 2007 four variously famous atheistical scientists, philosophers or writers, i.e. Richard Dawkins, Daniel Dennett, Sam Harris, Christopher Hitchens got together to discuss their atheism in Hitchens' Washington, D.C., apartment and to record this discussion for public consumption.
(It is currently available on DVD, from Richard Dawkins' website, and on Youtube).

At, it would seem, Christopher Hitchens' instigation this discussion group self identified themselves as "The Four Horsemen", (as an abbreviation of Hitchen's original "The Four Horsemen of the Counter-Apocalypse"), implying that their collective opinion is that religious belief tends to bring about disaster after disaster.

This groups unmoderated discussion was sponsored by the avowedly atheistical Richard Dawkins Foundation for Reason and Science.

At this time all four participants each had an established track record as famous / celebrity atheists or rationalists, this latter identification being the terminology preferred by Sam Harris.

Their individual atheism, or rationalism, has been being aired in the following forms:-


Daniel Dennett
Author of Breaking the Spell: Religion as a Natural Phenomena (2006).


Christopher Hitchens
Author of God is Not Great: How Religion Poisons Everything (2007).

At age-of-the-sage we hope that our visitors may find much to intrigue them on our site:

Links to some pages about Richard Dawkins, Daniel Dennett, Christopher Hitchens and Sam Harris, and their works, now follow:
(These are themselves again followed by selections of "Wisdom Quotes" and "Spiritual Insights" quotations.)


We hope that our visitors will be very seriously intrigued by assessing how the "Poetical" wisdoms, the "Inter-Faith" wisdoms and the "Christian" wisdoms that are collected on our site are both individually valid and also have strong similarities despite their diversity of origin:-

Wisdom Quotes from the Great Poets

A Disdain for Materialism
Poor and content is rich, and rich enough.

A Distrust of Intellect
The intellectual power, through words and things,
Went sounding on, a dim and perilous way!

A Yearning for Divine Edification
God guard me from those thoughts men think
In the mind alone;
He that sings a lasting song
Thinks in a marrow-bone;

Charity
That best portion of a good man's life,
His little, nameless, unremembered acts
Of kindness and of love.

Purity of Heart
A peace above all earthly dignities,
A still and quiet conscience.

Humility
The best of men
That e'er wore earth about him, was a sufferer,
A soft, meek, patient, humble, tranquil spirit,
The first true gentleman that ever breathed.

Meekness
Since my dear soul was mistress of her choice,
And could of men distinguish her election,
Sh'hath sealed thee for herself, for thou hast been
As one in suff'ring all that suffers nothing,
A man that Fortune's buffets and rewards
Hast ta'en with equal thanks; and blest are those
Whose blood and judgement are so well co-medled,
That they are not a pipe for Fortune's finger
To sound what stop she please: give me that man
That is not passion's slave, and I will wear him
In my heart's core, ay in my heart of heart,
As I do thee.

These spiritual insights quotations demonstrate the recognition of individual important Spiritual Truths by one of the world religions in the case of each "Truth":-

A Disdain for Materialism
Chuang Tzu put on cotton clothes with patches in them, and arranging his girdle and tying on his shoes, (i.e. to keep them from falling off), went to see the prince of Wei.
"How miserable you look, Sir!" Cried the prince. "It is poverty, not misery", replied Chuang Tzu. "A man who has TAO cannot be miserable. Ragged clothes and old boots make poverty, not misery".

A Distrust of Intellect
Sell your cleverness and buy bewilderment; Cleverness is mere opinion, bewilderment intuition.

A Yearning for Divine Edification
This I say therefore, and testify in the Lord, that ye henceforth walk not as other Gentiles walk, in the vanity of their mind. Having the understanding darkened, being alienated from the life of God through the ignorance that is in them, because of the blindness of their heart:

Charity
He that does everything for Me, whose supreme object I am, who worships Me, being free from attachment and without hatred to any creature, this man, Arjuna!, comes to Me.

Purity of Heart
The path of the just is as the shining light, that shineth more and more unto the perfect day. The way of the wicked is as darkness: they know not at what they stumble.

Humility
Would you become a pilgrim on the road of love? The first condition is that you make yourself humble as dust and ashes.

Meekness
Let a man overcome anger by love, let him overcome evil by good; let him overcome the greedy by liberality, the liar by truth! Speak the truth, do not yield to anger; give, if thou art asked for little; by these three steps thou wilt go near the gods.

A selection of wisdom quotes that demonstrate the profound depth of the insights that are recognised by Christian authorities are set out below. They are sourced from the Bible and also from the works of Thomas a Kempis whose "Of the Imitation of Christ" ranks as the second most widely read Christian text after the Bible itself.


A Disdain for Materialism
Some have Me in their mouths, but little in their hearts.
There are others who, being enlightened in their understanding and purified in their affection, always breathe after things eternal, are unwilling to hear of earthly things, and grieve to be subject to the necessities of nature; and such as these perceive what the Spirit of Truth speaketh in them.
For it teacheth them to despise the things of the earth and to love heavenly things; to disregard the world, and all the day and night to aspire after heaven.

A Distrust of Intellect
Beware lest any man spoil you through philosophy and vain deceit, after the tradition of men, after the rudiments of the world, and not after Christ.

A Yearning for Divine Edification
It is written, Eye hath not seen, nor ear heard, neither have entered into the heart of man, the things which God has prepared for them that love him. But God has revealed them unto us by his Spirit: for the Spirit searches all things, yes, the deep things of God.
...the natural man receives not the things of the Spirit of God: for they are foolishness unto him: neither can he know them, because they are spiritually discerned.

Charity
Beloved, let us love one another: for love is of God; and every one that loveth is born of God, and knoweth God. He that loveth not knoweth not God; for God is love.

Purity of Heart
Wherefore, my beloved, as ye have always obeyed, not as in my presence only, but now much more in my absence, work out your own salvation with fear and trembling. For it is God which worketh in you both to will and to do of his good pleasure. Do all things without murmurings and disputings: That ye may be blameless and harmless, the sons of God, without rebuke, in the midst of a crooked and perverse nation, among whom ye shine as lights in the world;

Humility
Neither be ye called masters: for one is your Master, even Christ. But he that is greatest among you shall be your servant. And whomsoever shall exalt himself shall be abased; and he that shall humble himself shall be exalted.

Meekness
Wherefore, my beloved brethren, let every man be swift to hear, slow to speak, and slow to wrath: For the wrath of man worketh not the righteousness of God.


If any our visitors were to be so open-minded as to give our presentation of the QUITE AWESOME Wisdoms that have been won by the Mystics and Poets a fair hearing we believe that we can firmly establish their own, individually-held, opinions of the collective insights of said Mystics and Poets to being one of appreciation and respect.